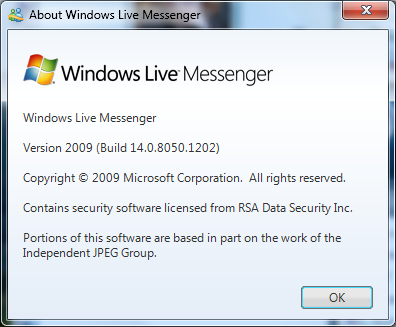 I had that posted already. At the top

Bman said:
I had that posted already. At the top
Click to expand...

Sorry, I didn't look at the image you posted. Thanks for telling me.
N

This new update integrates the website and msn together quite well. Groups and friends are all the same, anything you do on the site goes back to msn. All kinds of things like that. I am happy with it.

im downloading it right now.. lets see how it goes

Ok, upgraded on mine, and so far so good. I like the new interface

well.. after trying it for a day i can say i like it a lot (hope i dont jinx it )

the whole interface seems cleaner, and its also more stable
i think it performs a little faster too (the old beta used to have micro stutters sometimes, at least for me)
i also like how they change the sign in alerts

oh, btw.. has anyone tried it on the windows 7 beta? it's supposed to feature its own jumplists

I can't say I like what they have done with the taskbar with this new build in Windows 7, would love the choice for it to go back to XP/Vista style of behaviour.

I forgot to mention that, the new sign in popups and such, those are looking very good. They haven't changed those in awhile. And even the icons on the taskbar and everything look really good. Quite pleased. And since installing it 3 days ago, I have had it running without crashes. Much smoother then the old beta.


It is Windows 7 specific, I'll try and do a screenshot of what I mean.

So the previous build of 9 worked as it did on Windows Vista, but the new build behaves differently on Windows 7.

Ok so here it is as it appears. This is how it would look with just the icon in the notification area - but it does not appear there instead appears on the taskbar as if it was open.

Now this is cool and completely off topic, but as it appears on the start menu. I imagine it will eventually list contacts you have spoken to recently or at least be a little more customisable when final.

So when you open up the messenger list you then get two spots taken up on the taskbar.

Hovering over the taskbar, I really need to update that photo as I have infact shaved and had a hair cut \o/

So there we go.

I am confused about your comment on multiple things on the taskbar, if you dont have something like TweakUI or that reg hack that puts the same things into one tab, of course there are different tabs on the taskbar?

*EDIT, just noticed that second taskbar tab is yours, not another person..hmmm ic ic

Well they updated a lot in Vista. That kind of thing will be ongoing thru the release process. I guess if you have anything specific in Vista you want me to take a look at I can.

Electronic Punk said:
Well they updated a lot in Vista. That kind of thing will be ongoing thru the release process. I guess if you have anything specific in Vista you want me to take a look at I can.
Click to expand...

Does Windows ReadyBoost work the same way? Is Windows 7 noticeably faster when you use ReadyBoost on it or is it just about the same speed as Windows Vista?

I think Readyboot was only ever optimal if you had less than 2 gig of ram and I don't really have anything with less than that around.

I'll see how things going during the beta once it starts tho and then talk about it should I be permitted.
You must log in or register to reply here.