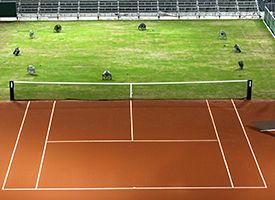 One is the king of grass, the other the king of clay. On Wednesday, Roger Federer or Rafael Nadal will be king of both.

"It'll be fun to find out what it's like to play on a court with mixed surfaces," Federer said Tuesday. "And it ought to be interesting to see who chooses the better tactic."

Organizers needed 19 days and $1.63 million to create the court, which divides the surfaces by halves for a unique match in which a player can receive on clay and hit a winner on grass -- or vice versa.

"The result is not the most important thing. It's about having fun out there," the top-ranked Federer said. "It's going to be exciting and a good atmosphere. It doesn't always need to be crazy serious out on the match courts."

A sellout crowd of nearly 7,000 is expected at the Palma Arena for the match, which is backed by the Balearic Islands tourism bureau.

Nadal comes from Mallorca and has the homecourt advantage.

"I like the fact that the stadium is located in Mallorca, Rafa's home," Federer said. "He has been to Basel [Switzerland] after all, and now I've got the opportunity to play at his place for once."

The second-ranked Nadal has won a record 72 straight clay-court matches, including two consecutive titles at Roland Garros in Paris.

Nadal holds a 7-3 career edge against Federer. He beat the Swiss star 6-4, 6-4 in the Monte Carlo final on April 22 to extend his clay court record against Federer to 5-0.

On grass, Federer leads 1-0, having beaten Nadal in four sets in the Wimbledon final last year.

Federer has 10 Grand Slam titles, but still needs to win the French Open to complete a career Grand Slam of all four championships.

I hope somebody puts this match up on YouTube!

grass is relatively one dimensional, you serve and volley, you try to take everything in the air you can, your strokes are not as important as your serve

clay, serve is not as important as strokes, incosistant bounces, inconsistant sruface for movement

I feel that there is going to be a serious injury to one or both the players.


but check this out:

antena 3 (spanish tv network) paid 3 mill euros, which went to the players. then they sold the rights to 21 networks worldwide, but profits weren't made public.

the regional goverment of the baleares apparently paid 1.2 mill euros to host the event, but the actual number may be higher (close to 2 mill).

oh, and the creator of the event is planning a rematch.

as expected by yours truly

That was cool, cost something like 1.3 or 1.6 million to make the court. Neat idea indeed
You must log in or register to reply here.

Steevo
Also Hi EP and people. I found this place again while looking through a oooollllllldddd backup. I have filled over 10TB and was looking at my collection of antiques. Any bids on the 500Mhz Win 95 fix?
Yesterday at 4:26 PM •••