So Kyle Katarn asked if I was interested in taking a look at either or both of his software products SUMo or KCleaner, I let him know that I would be more than happy to check them out as long as they worked fine with the 64bit version of Windows 7, so he suggested I take a look at SUMo.

Here is the applications official description:

SUMo, which stands for Software Update Monitor. Thanks to SUMo you'll be able to keep your PC up-to-date by using the most recent version of your favorite software ! Unlike build-in auto update features, SUMo tells you if updates are available before you need to use your software.

So the first thing I noticed when I was in the process of installing this application was that it does come bundled with the ReleventKnowledge and SeekApp software, both of which I would consider spyware/adware so you should be careful to deselect these on installation if you don't want to install them (and frankly I have no idea why you would want to) - I appreciate that they make money for someone but yeah, not a fan. You should also note that during installation I found all background applications seemed to hang, but when installation was either cancelled or completed this windows were responsive once more. When I mentioned the spyware in the installer to Kyle, he mentioned that a clean or lite version is also available for download on their site.

Ok, so here is what I saw once I had run the application: 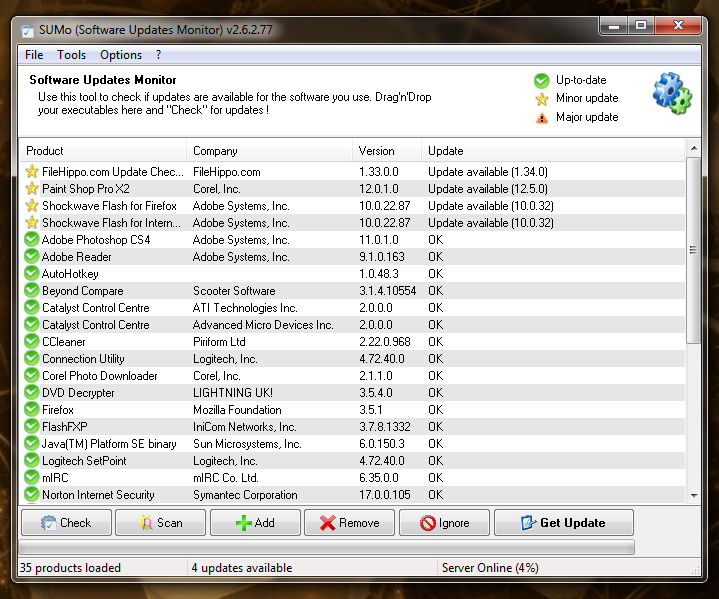 As you can see I have several applications that need updating. Amusingly, it has detected that another updater, the File Hippo Updater needs updating (it actually fails to detect that itself). It scans quite a few different applications, most are up to date as this is a very new Windows 7 installation, but it does catch that my Shockwave Flash needs updating. On a previous check it also picked up that my copy of Photoshop needed updating but I did update it using Photoshop's own built in updater. It also detected that I wasn't running the latest version of Paintshop Pro X.

So, I updated what I could (ultimately by visiting Adobe directly and updating from there. The Paintshop Pro update it found isn't actually a free update, so sadly I couldn't update and as I don't use Paintshop Pro for editing images I wasn't particularly concerned about getting it updated. It would defintely be nice to know that this is a retail update from either within the application itself or the page you are sent to when you select 'Get Update'.

The application also allows you to enable beta updates and in my initial run it discovered that there was an update for FlashFXP. As a registered user that does use that particular software in beta form, I was suprised that I wasn't already running this version so checked the Inicom forums for information only to find no reference to a 3.7.9 build with 3.7.8 build 1332 being the latest official beta. I asked Kyle and he mentioned that there was a newer version on a popular piracy site, hardly a good source so I gave that one a miss. Regardless, it no longer seems to be flagged as out of date so this application updater seems to very closely maintained when users provide feedback.

With regards to uTorrent I also discovered that if you use uTorrent 1.9 then it may well be slower than 1.8.x so I actually downgraded.

As SUMo supports many different applications, updating them isn't quite as simple as clicking on the application. Instead you will be taken to a page such as this one:
SUMo - Software Update Monitor.

The page will highlight your particular version with a star, the most common with a green highlight and also make you aware of any updated versions, which is why you will have clicked the link in the first place. It may well not be that easy to find the actual application update instead suggesting five sites to check, a google search would likely be useful as well - but hopefully having installed the application you will generally be aware of where to get the latest versions. So it really acts as more of a notification application than an actual updater.

One thing the application did not seem to detect was applications in my 64bit program files directory. To be honest, I don't use a great deal of 64bit exclusive applications, but WinRAR is one of them, when I mentioned to Kyle that it wasn't finding WinRAR properly he mentioned I could drag the application onto the main SUMo window it would be checked with the other applications.

Other common 64bit applications it also missed included the 64bit version of Java, the Zune software as well as the 64bit version of Photoshop (although updates for that are usually in tandem with the 32bit releases). Kyle mentioned this would be addressed in an upcoming version.

So again, if you are running an older, aged system you may well want to give this application a look to ensure that your applications are up to date, not only could you be missing out on some bug fixes, increased functionality but also a more secure system.

I suspected this wouldn't be a long review, so decided to take a look at two other software update applications, the first being the previously mentioned File Hippo Updater.
I ran all three updaters and took screenshots at that point so I could compare what they actually detected.

The File Hippo Update Checker is available as both an installer (which creates the relevent shortcuts) or a self running executable, very easy to use and here is what the File Hippo updater was able to identify:

As you can see it only detected he Flash Player updates and of course failed to detect that the File Hippo application had also received an update (very important stuff - Version 1.034
Fixed updates count shown in bubble when UDC is minimized to tray. )

I had also run this application a few days ago and found that it had correctly identified that my 3.90 beta 4 was out of date, but then redirected me to the download for the 32bit version, only a minor detail but something worth noting if you have made the jump to 64bit, if nothing else it will highlight to you that a software update is needed.

The last bit of software I decided to take a look at was the Secunia Online Inspector which is a little bit different to the previous two applications as it runs directly from the browser using Java. 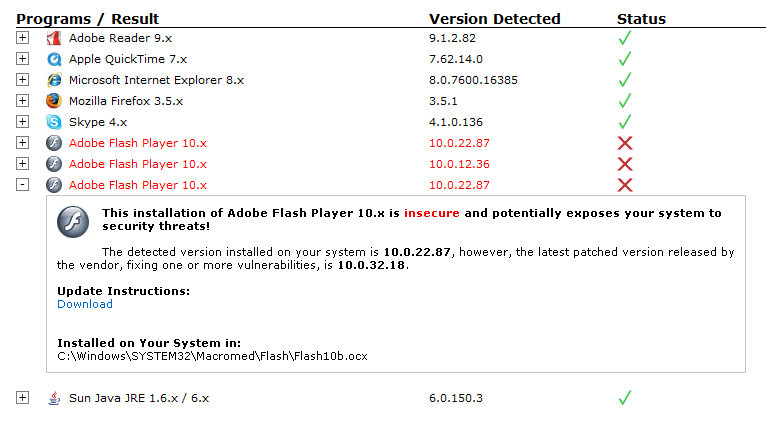 It generally does seem to check less applications than the previous checkers, but is another option. As you can see on my particular system it detected three updates were needed for Shockwave Flash. The older version (10.0.12.36) actually turned out to be a 64bit version of Flash, but when I attempted to update directly from the Adobe site it told me there was no 64bit version of Flash and I should use a 32bit browser.

So there you have it, you should definately give these bits of software a look as epecially on older systems you may well be suprised at which applications have had a sneaky update.
Last edited: 2 Aug 2020

Sounds like something that could come in quite handy but spyware? UGH!

Well just untick the boxes or install the clean version
I actually let one slip by the other day, wasn't from this application but Spybot soon cleared everything up.
N

I was using Filehippo's Update Checker for almost a year or more. And I was quite happy with it, detected most of my programs and was easy to get an update, and I loved getting the updates from there site (my favorite place). Thought a couple months ago, or maybe even when windows 7 came out I start to have issues with it. Not updating, not finding any updates when I know there are, and a few others.

So I found a program called update notifier by Clean Softs, which is an alright program, seems to detect more programs then filehippo, but has not as good of a download page. The main issue is that 90% of the time when I click to run it, comes up and says can't connect to server. So it's basically useless.

I might try Filehippo again, or Secunia Online Inspector because SUMO does not seem to sound that impressive. Thanks for the review.

You know what I really want? I want the ability to subscribe to mailing lists to get instant notifications when updates are released. Heck, may already be possible, just have to dig for it. I don't care about most of it, but certain tools that are used in the Enterprise that release critical security patches (Adobe, for example), need to do a better job of notifying people. I rely on the "Blogosphere" mostly to see when they are out. For various other reasons, we have all software auto-updating disabled in our environment, so we have to just pay attention ourselves.
N

I just tried installing SUMO, and NOD32 takes one of the files and deletes it because its dangerous. Now I know this could be a false positive, but any program or file that does that, I do not like.

Did you try the clean version?
N

No I don't think so. Will give that a try later on.

You can choose to install or run as portable.
N

lol Zombie, in my first post I said I used that.

Ya but no link provided.
N

Update Notifier is good, but I hate where you need to download software and well there program tends to not work 50% of the time. My favorite is still FileHippos. But none are perfect so far.
K

SUMo's been updated today !
You must log in or register to reply here.