How Does Windows Assign Available Memory

I've seen all over the internet, "How much memory is too much.

The actual answer, is the size of your disk, if you can get all data on disk into memory, the computer will see very little latency.

I've also seen questions like, "how many cores are too many"

The answer there is, you can use as many cores and processors as you have threads active at any one time., so that all threads get every quanta the request without que.

Most operating systems today have policies putting as much data in memory as possible, the saying goes, “free memory is wasted memory”

Here’s an example for memory distribution by Windows.

We're looking at this graph, which you'll find in resource manager, this box has 12 gigs of memory

“Hardware reserved” is dedicated by Windows for bios, some drivers and peripherals.
As you see from the graph, To get to this graph, I'm actually only using about 6.5 gigs of memory, Windows took the opportunity to put more than 4 gigs of memory to use

I have a 512 gig SSD, if I had 256 gigs of memory, in the best case scenario, most of that would wind up populating ram.

To get to this graph fo ryourself, hit the windows key, begin typing “resource”, click the resource monitor once it pops up

Click that, get this, on the bottom is your graph. 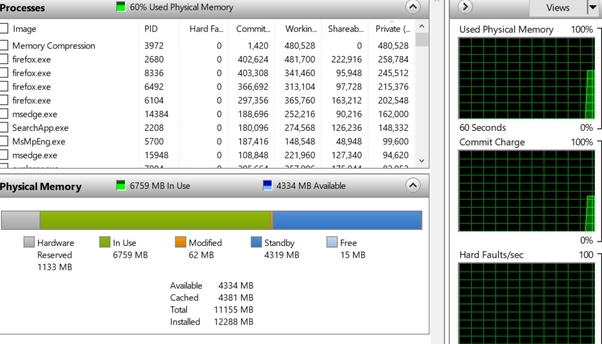 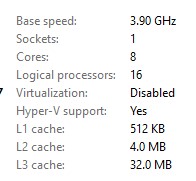 I wonder if you just booted the system or you turned off superfetch?
I hardly ever boot I always stand by
Last edited: 26 Sep 2020

Superfetch is disabled automatically by Windows if your SSD is fast enough. If the SSD is not that fast then superfetch and prefetch will stay enabled. The "superfetch" service no longer exists in Windows 10 as it was merged into the SysMain service, which handles more than just SuperFetching.

From: Don’t Waste Time Optimizing Your SSD, Windows Knows What Its Doing

Disable Superfetch and Prefetch: These features aren’t really necessary with an SSD, so Windows 7, 8, and 10 already disable them for SSDs if your SSD is fast enough.
Click to expand...

I am on latest release.

Superfetch isn't turned off by default with any SSD Zombie

Regedit shows you prefetch, that's not related to superfetch.

You're right, they changed the service name of superfetch, but it still there, and it's improved

I have a very fast toshiba nvme, one of the fastest at the time purchased, 99 percentile 2 years ago, now there are faster, this is only 78 percentile today, superfectch has always been enabled by default

That site you linked is incorrect, I never enabled superfetch, it's always been on, I would have turned it on if it was off, but no need

Superfetch isn't anything like prefetch, which has to do with disk placement for fastest load times, yes, that was for HDDs and does nothing I can think good for an SSD

Read Marks writing on the subject it's great info.

Why would someone think this isn't a boon with an ssd?

If the operating system can get your disc into unused ram, this is fantastic, why would someone want that off no matter how fast their hard drive?

I actually predicted pre-loading data into ram when you have enough, here on ossn about ten years ago, later I'll try to find that discussion, some said I was crazy back then, I insisted.

Yes it it running. 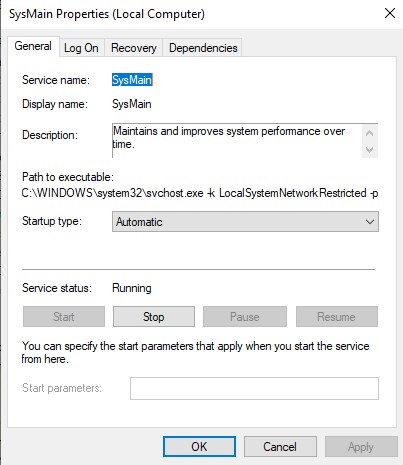 Backed up system with Macrium so I could reinstall after testing then I did a clean install of 2004 and all the memory stats in resource manager were the same as my previous screenshot.

In that case, I don't know why mine is caching more than yours, except for possibly longer uptime, I never re-boot unless there's an update

American Zombie said:
Yes it it running.
Click to expand...

I did a reboot to see how long Windows takes to pro-actively populate memory on my box, first is just after boot, second is about 5 minutes in, while typing this response, third is seconds later, fourth is about a half hour, eventually it will get close to zero

From about that point I put the box to sleep, went out for some tennis, now, after waking, playing chess online and watching some vids, the Windows cached just about all the ram on my box, I'm using about 6 gigs realtime, about six gigs is cached, just about everything I launch now will be launched as if it's already running

Mine uses up free memory too (got all the way down to 0 MB) depending on how much I have open but then the free memory increases again after closing the program or game.

Have you ever seen what it says about the free memory if you mouse over it?

Mine goes down to zero with nothing but browsers open

Since it can't be too verbose, the box is already too big, it winds up being incomplete

Free memory doesn't get used first if the data called in in the standby list.