Didn't have my tuner card in there at the time.

The system is completely silent except for my video card. Looking to get an after-market solution down the road, just haven't done it yet. 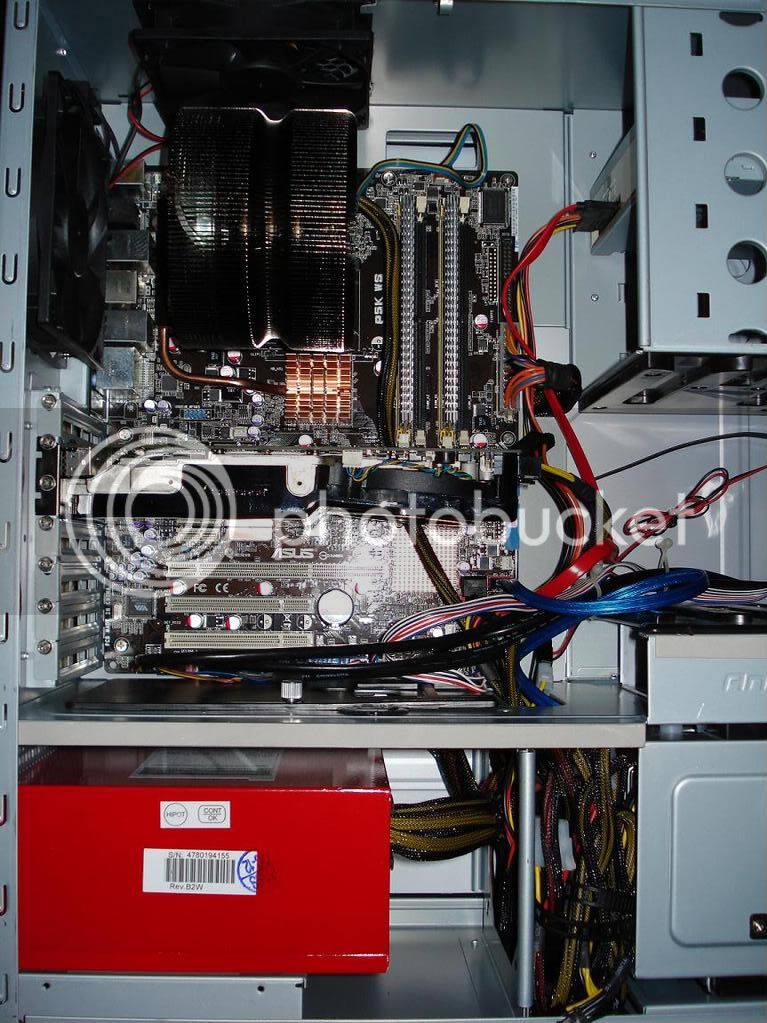 Nice setup, which heatsink is that again?

Keeps things pretty cool. On 50% load, I am about 28C which isn't too shabby

How you likin that CPU?

Awesome is as awesome does.

could you not run cables up behind the mobo? I run all mine that way on my P182.

LordOfLA said:
could you not run cables up behind the mobo? I run all mine that way on my P182.
Click to expand...

No, unfortunately not all of them.

I ran half the big ones but the 4/8 pin power connector would not go all the way. I might get an extender but considering the overall layout, I am satisfied as is.

I had sworn off Sony stuff for a while but now, I have a ps3 and a camera from Sony lol.

I had sworn off Sony stuff for a while but now, I have a ps3 and a camera from Sony lol.
Click to expand...

i've been thinkin about getting something to replace my CNPS9500AM2.... was lookin at the 9700NT, but don't know if it'd be enough of a boost to warrant the extra money. also would want a fan controller.... but hard to find one that i like. *sigh*.

Sazar..... you sure you want that 4/8-pin power cable running between the video card and motherboard.... and seemingly resting on that heatsink? with no fan on that thing.... pretty sure it could possibly get warm enough to soften/melt the wire. who knows though....

There is actually clearance on the cable above the heatsink

Also, there is plenty of space and the cable seems to be just fine. That particular heatsink doesn't get too warm and I am not oc'ing. The one I would be more concerned about is the one around my cpu, but the cable is routed safely.

The 9700NT does not have a fan controller, you need a mobo that supports PWM and allows you to select the fan speeds (or accoustic/performance settings).
Last edited: 17 Apr 2008

yeah. knew about the lack of the FanMate2 with the 9700NT. but i think a FanMate can be connected to it should you already have one. I was thinking more along the lines that i want a fan controller to put in a drive bay to control multiple fans. have having a fan connected to a PSU cable.

Nope, the fan-mate has a different set of connectors. The 9700NT uses a 4 pin setup (like a regular IDE Hard-Drive uses)

.... except smaller. i know what the PWM fan connectors look like. just like a regular 3-pin fan connector, but with an added pin on the end. Thought Zalman had an adapter that came with to allow you to use a FanMate should you already have one.

wow your storage is quite huge.

I will post new pictures, perhaps over the weekend, after I try and clean it all up a little more.

I just received my additional memory modules, so 4 x 2 GB will be installed, plus I will be bumping up to Vista x64 during the course of the week.

I am horrifically jealous - out of passing curiousity, how much did the entire rig cost you roughly? Looks really nice

Hmm, probably about $1000 or so. I get some corporate discounts and all my software is free (for my use) so I got lucky. Else Office Ultimate, Vista Ultimate and several other apps would easily add several hundreds more

Running a 2407 Dell Ultrasharp with the config as my primary and I have a 19" widescreen display/television hooked up as a secondary display if needed.

My living room has a PS3/Xbox setup which are currently hooked up to my television. I gave my brother my old computer (4400+ X2 proc, 2GB Corsair XMS, 1950XT video and my XP Professional Retail CD). I had initially planned on using that as my media box but encoding was painfully slow on the dual-core

The Core2 quad is aeon's faster and doesn't bog down while it dedicates threads and cycles for processes.
M

Yikes, even your old system makes mine look horribly out of date. I've said it once, but I shall say it again I'm rather jealous, hope it runs as well as it sounds

Yah, everything runs like a dream except for the ridiculously unstable Nvidia WHQL drivers. You'd think they'd make drivers that don't cause Vista to re-initialize them every few times I run a game.

The OS is robust enough that it has only BSOD one time since I bought the video card, in about 3 months of usage, otherwise it just reinitializes and continues ticking along but even the lag while it reinitializes is annoying.