So... I went a bit hefty and got the Video card I wanted. Now unfortunatly, I can't give a full review until my system is:
A: Fully running
B: I have a bigger monitor at some point to test higher end gaming.

Old Video Card:
nVidia Geforce FX 5200
Radeon X550 (was temporary until I obtained the one I wanted)

Now that all that is out of the way...
Diamond's rendition of the graphics card. Let me pull it from the website:
Features at a glance
Optimized for Windows Vista with comprehensive DirectX® 10 and DirectX® 9 support

---------------------
Interesting still?
The package also contained the Black Box for Steam.
Now obviously, you need a hefty system to pull it off to its fullest. Now I've read reviews about the differences between the OEM version and the Retail versions of the HD 2900XT's. Its a good thing I didn't get an OEM version.

Let's look at the size of the Video card.

This gigantic thing comes out of the box 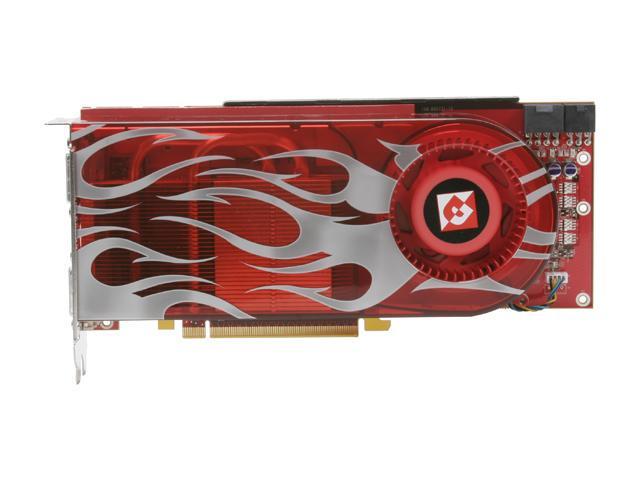 Now I looked at it and figured "Hey... this ain't that big that people say it is."
So I decided for more room to take out the computer and figure a better way to put it in. I came across the slight little issue. Excuse my bad red drawing, but the redness shows the area that it takes up as of right now.

I had to move the hard drive connection I had at that particular SATA slot down 1 because there was no way I could fit it before. It sucked rather badly on the tightness I had to go with. After looking further... seeing that size, I can't crossfire with this motherboard unless I got a 2nd card that was slimmer than the current one.

So, after getting it setup, I ran it on my system. I decided to go with ATI's official drivers rather than Diamond's just for the sake of making sure that mine were up to date.

After getting everything up...

I decided to play with the settings. Rather a bad idea so I turned everything to go by Application based and the rest as high up if it didn't have an Application checkmark box. THere is a reason here. I decided to test this on a few games and found that for some reason, I get HORRIBLE framerate for some odd reason. I have a 2nd screen so I run Windows desktop with extended mode. The extended mode has me watching TV while I play games. Well, it seemed that the settings went global and would be processing for 2 things at once. Not a good idea for a TV Tuner to be decoding the signals and getting Graphic Processed to get 16x Anisotropic and 8x AA going while getting a game to have all that as well on top of whatever settings that is placed in the game settings.

After fixing that, my framerate went up by nearly 110%.

Mind you, I'm testing this on XP and when I get a game that is DX10, I'll use Vista to test it.

As for the Fan that everyone keeps complaining about. One of my friends has... if I recall either a 7600 GTS or a 7800GTX. For anything he does including just opening and browsing the internet, that fan spins up and its LOUD. I mean its louder than his system fan.

The Fan in the 2900XT isn't even close on loudness in a good way. It's much more quiet than my friend's video card fan. Not to mention, This thing cools rather quickly. On Idle, it seems to run at 60 degrees Celcius with 504 MHZ core and 533MHZ Mem Clock. When it runs with the settings I have, at 743MHZ Core and 1052MHZ Mem Clock, it only goes up at most to 70 degrees. The fan's sound is noticable, but its about as noticable as a regular system fan that is raised towards the max if it isn't a silent type system case fan. At least, that is the best comparison I can make. When the thing is done with games, it will cool down in about 1-2 minutes back to 60 degrees.

Checking my system temp, it went from 40 degrees to 43 degrees. So its a Slight increase. Not much of a bother to me. I only have 4 fans in my system: 1 from the PSU, 1 on the front of the Case itself, 1 In the back Blowing out that I got, and then the CPU fan that technically also fans the system at the same time.

Now if the features on the video card get utilized more by developers, it might give nVidia a run for their money.

What stops it from the full?
The drivers need soem more tuning to get certain games working which is understandable.
N

The picture that you so excellently made lol, shows how they aren't exactly designing the cards or motherboards good. Either way I noticed that because when I picked up my new 8800GT that was the exact same problem I had. Having windows installed on the drives using those slots, it can cause problems to move around.

On the note of the card itself I am glad you have done a review. There are not too many so far, and none that I have read yet and I was really wanting to hear about this card. I have always been with nvidia but have always been interested with ATI. Now I don't suppose you have or there is a link to a review of both the HD 2900XT & the 8800GTX/ Ultra? That is what I'd really like to see, put those cards up against each other and see who comes out on top.

All in all, good review.

A link to a review of the 2900XT and the 8800 GTX / Ultra??? Well... Unless Tom's Hardware done a newer review with the newer drivers and such, I doubt it. Last time they reviewed it, it came out to be that the 8800 GTS was the best rival for the video card. I still don't have a bigger monitor so I can't edit the review for the video card assuring the full power of it. I can only vouch under the power of 1280x1024 max.
After the newer drivers though, I can now understand by what people were saying about loudness. I decided to use the ATI Overdrive more and see how far I could push it higher. 2 things that scared me... the sound of the fan... and the temperature gauge.
At 760 Gpu clock (that's 17 up from the standard) and 1015 mem core (15 up from standard), the temperature went to 90 degrees and the fan was like being inside of a Jet Liner about to take off.
But I really want to compare the 3870 ATI cards.

The problem as I said before... if developers use the features on the ATI card... performance might sky rocket.
You must log in or register to reply here.