Khayman said:
They all rock, ALL, ALL

If and ONLY if trinity had died in the 1st. The lame "romance" (if you can call it that) was painful and destroyed a very promising series. Watching nothing but to stick figures try and show emotion was painful for me ... sorry.

Apparently, from a very unreliable source
There is another 2 films in discussion
I think one of them was called Matrix: Ressurection


Henyman said:
i'm off to tesco to abuse my staff discount now
Click to expand...

LoL, the old 10% discount card, I'm always using my mates one.
Im part of the TC contract cleaner crew ,
we don't get discounts

I can't see more matrix films happening, especially with the remaining cast. I would love to be proved wrong tho, and if they did happen, I can't see them having the same "unlimited-kind-of" budget that the last two must have had.
T

They should have stopped after the first one anyway.

Twas an obvious cash cow, why on earth would they do that.
T

Electronic Punk said:
Twas an obvious cash cow, why on earth would they do that.
Click to expand...

For the sake of humanity.
Anyway, they could have made a movie, with a new name and a new plot (a good plot instead of the crap they chose to make) and the fact it was a movie by them would have made pretty much the same cash.
Instead they choose to milk the old cow and kill it.

The could have dropped that painful romance between 2 ppl w/ no emotion and kept the movie action like it was meant to be ... like the 1st was.


aka - kill off trinity

It was excellent. I enjoyed it all

I personally think 3 was going too far with the whole Neo being blind but still being able to see things. It was getting annoying. Plus the fight scene in the end was completely too long and pointless. He entered the matrix to fight and lose. Just for it to get reset. I think they could have done a better job with the last movie. It was an obvious setup. First movie was the best, 2nd one wasn't as good, but it was alright, and the 3rd one wasn't that great but at least continued the flow.

I was hoping they would have giving the matrix thing a break and rested their creativity so that they could possibly make a 4th one that was actually filled with some full on creativity. That way they could maybe start to show the real world developing again as people are being released from the Matrix when they want to be.

The matrix wasn't reset. Neo returned Smith to the source.

I found this indepth looking into revolutions interesting. of course it probably wont help the people who hated it, but for us sane people ....

Khayman said:
I found this indepth looking into revolutions interesting. of course it probably wont help the people who hated it, but for us sane people ....

Khayman, Not by any philosophy you can count as "sane"
And I'm saying this for the last time, maybe it will go through your thick scull:
MATRIX REVOLUTIONS SUCKED!
Yes it did!
YES IT DID!

You could tell by the first 5 minutes of "Do you know what Karma is?" (Wich easily could have been responded with "Cool, lets go eat a burger).

one snag i dont get if the machines are gonna release all the humans how will they get their power? Was that not the whole reason they left them alive for in the first place :-/

indyjones said:
one snag i dont get if the machines are gonna release all the humans how will they get their power? Was that not the whole reason they left them alive for in the first place :-/
Click to expand...

well the humans can possibly under scortch the skys and the machines can use solar? they also have a nice stockpile of energy i'm sure. oh well ...

No, the deal was for the people who want to be freed, get freed. Not everyone gets freed.

Reset, returned to the source, whatever. It seemed like things were reset because everything was back to normal in the end. Why couldn't they just hit the big ol reset button. Or maybe they had a recovery disc for the matrix. Who knows.

makes it sound like compaq or HP buit the matrix

Benny said:
MATRIX REVOLUTIONS SUCKED!
Yes it did!
YES IT DID!
Click to expand...

Even the special release? 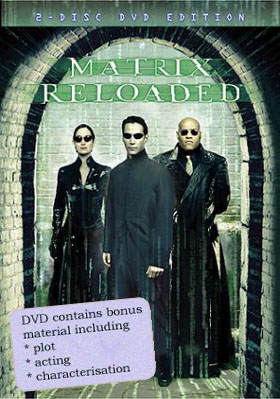