Like most hardcore FPS (first person shooter) players, I had never heard of Farcry or had paid little attention to it; it had faded into the background far away from my obsession with the likes of Doom3 and Half-life2 - two games that were going to take the genre to the next level. However, both of those games have failed to appear: One because of various leaks and the other because it realised how good the other was - because of the leaks (perhaps). Dishevelled, I started to think the PC gaming market was dying. In January, all that changed.

Prompted by a load of screenshots I suddenly saw appearing, I decided to download the FarCry demo, no small feat downloading 465 megabytes on my overworked ISDN modem, but I did it. The screenshots gave me the impression it was going to be one of those all looks/no content kind of games, a usual occurrence with those games that attempt to push graphical boundaries. I was pleasantly proved wrong, although the demo had its fair share of bugs, what I saw impressed me. Alot.

There is no sense in giving more feedback on what I saw in the demo, as this was three months ago, but needless-to-say I rushed straight out and bought the game on a recent trip to the USA - but I had to wait another week to get home and play it, as I don't think my laptop could have handled it.

I perhaps should have waited until I got back to the UK to purchase it, installing the game from five CDs is a lot more hassle than installing from a single DVD. An increasing trend, that should definitely be appreciated, I mean who doesn't own a DVD drive these days? I don't have too much of a complaint though, as I tried installing Final Fantasy XI the other day, and actually getting into the game, with a 1mb internet connection, still took me six hours. 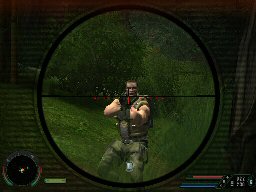 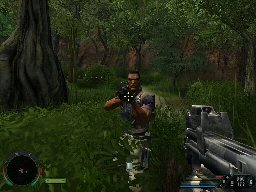 Anyway, onto the game itself, if you have been living under a rock, here is the general overview, directly copied from the back of the chunky CD case:

"Explore a vast island chain rendered in exquisite detail through state-of-the-art graphics technology. Outwit hordes of mercenaries, annihilate threats from more than a kilometre away, and use every vehicle, weapon and strategy at your disposal to outcast the island's evils and escape with your life"

After the tediousness that was Condition Zero (the deleted scenes) this game is very refreshing. Don't get me wrong, I loved every bit of Half-life, Opposing Force and perhaps even Blue Shift, but I found myself trying to finish CZ's deleted scenes, merely to put a notch on my belt and stop myself ever having to play it again. The game opens with a fairly confusing introduction, but yeah I can deal with that, basically his boat has been blown up and he wants revenge, oh and there is some woman involved too, but enough of that, this game has a huge draw distance and plenty of sniper rifle ammunition...

The weapons in this game are stunning and very satisfying to fire, the number of bullets it takes to knock an enemy down does vary a lot which keeps thing very interesting, also what are the chances of getting a headshot from over a kilometre away? In turn, this does mean your own life can be taken within a few shots and with no manual save feature, this does add to the suspense, rather in an Aliens vs. Predator kind of way, especially when our genetically engineered friends appear and can kill you with two slaps on the back. Initially, ammunition does seem sparse and I was careful with my shots, but later on in the game it was everywhere, though I was still careful as you can only carry a maximum of four weapons at a time. 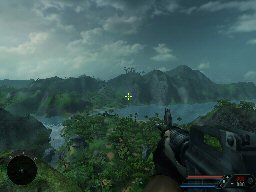 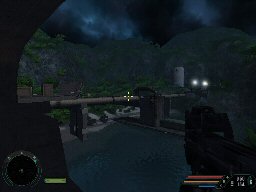 The artificial intelligence of the enemies is a little confusing, at times it is very good and I often found myself having to fall back to stop a flank attack and indoors an enemy will have no problem running halfway around a building if I am spotted. Other times it is just daft - ducking in the undergrowth I have experienced several enemies just stood there looking at me for several seconds, more than enough time for me to wake up and knock him to the floor. Overall though, it is not something that happens very often and doesn't detract from the gaming experience.

The intelligence of the creatures you face in the game could also be questioned; huge enemies equipped with rocket launchers would often stop just around the corner from me, giving me the chance to shoot them in the head, repeatedly, at my leisure. They also, apparently, can't swim, as soon as they touch the water on a level where you have to escape from the top of a waterfall they drown. Much to my enjoyment though, as I was finding that particular level very difficult, stealth is not my forte. But is this not what games are about? You find a weakness and exploit it? Who knows, but I can't really say it detracted from my gaming experience.

The real star of the game is not the main character, but the environments themselves. This game is famous for it's depiction of the tropical environments - the largest and most detailed maps I have seen, and I am not talking endless hills as we have seen in various games such as Delta Force - these maps are highly detailed and have an apparent viewing distance of nearly one and a half kilometres. In contrast though, various areas in the game are indoors where you find yourself tiptoeing down claustrophobic corridors in dim light listening out for footsteps of the enemy. 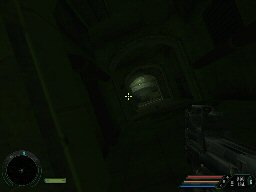 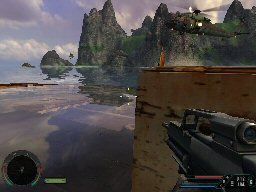 Such environments do not come cheap though! The minimum recommended system for this game is a gig processor, 256 Megs of ram and a 64 Meg graphics card, not to mention the 4 gigs of hard drive space the game needs.

The sounds and music are also very impressive, the weapons have a nice feel to them as you are firing slugs into your hapless enemies, and perhaps they are too loud as any kind of gunfire normally attracts any enemies in the area.

Walking across the huge islands could be tedious but we are given the opportunity to ride in various land and sea-based vehicles, the majority of which are armed with a powerful chain gun and even a rocket launcher. Some people may even fulfil their wish to drive a forklift truck, if they were so inclined. I was hoping to get a chance to fly around in a helicopter, something I don't think isn't there due to limitations in the engine, but the fact that if our hero did chance upon a chopper, then he would most likely just leave the island and never come back.

The game is full of scenarios that have been seen before, but there are also that have been re-imagined and even some I don't think I have ever experienced, such as attempting to shoot down a helicopter before a ferry sinks leaving me defenceless - a slow moving target attempting to reach the shore, very good stuff! The general storyline is quite interesting though perhaps a little short, the game itself is of a fair length though, in comparison to other titles available these days, but I guess it has an interesting twist at the end. 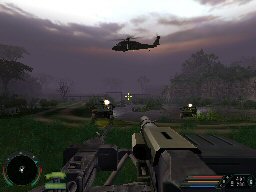 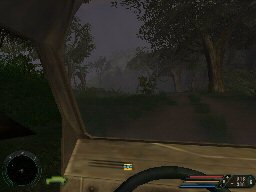 I didn't get to experience the multiplayer side of things, I am not really in favour of signing up to have to play, though I have now finished the single player experience, this may soon change, I seriously need my FarCry fix. The inbuilt mod functions mean this could soon be a reality, not only does the game have an inbuilt mod browser, but also comes with the tools to create your own maps, so hopefully some interesting things will soon appear.

One of the things I am waiting for has to be the 64bit version of the game. I have my 64bit processor, operating system. All I need are a few 64 bit games and some 64 bit graphics card drivers and I will wave goodbye to 32bit. I hope. It is difficult to say what kind of enhancements a 64 bit version will bring, but I guess we will just have to wait and see!

As great as future titles are concerned, Half-life 2 springs to mind, I don't think I am quite looking forward to them so much. Many features of what I was looking forward to in Half-life 2 are present in FarCry. The vehicles, the stunning graphics and animation, I just hope when these titles to arrive that we don't forget about Farcry.
You must log in or register to reply here.