Another Body Found in killers house 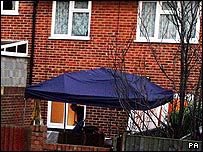 Officers from two police forces have been searching the house

A second body has been found at the Kent house where the remains of Vicky Hamilton, 15, were found on Monday.
Police said the family of missing teenager Dinah McNicol had been told.
Officers have been investigating the disappearance of Ms McNicol, 18, who failed to return home to Tillingham in Essex from a trip to Hampshire in 1991.
Peter Tobin, 61, who previously lived in the house, has been charged in Scotland with the murder of Vicky, who was from near Falkirk in Stirlingshire.
Her body was found in the back garden of the house in Margate on Monday.

I will be absolutely elated if they have [found Dinah]. It will mean we will be able to grieve as a family


Police said the second body find was a "significant development'.
Officers from two forces have been in Irvine Drive, Margate, since Monday.
Mr Tobin appeared at Linlithgow Sheriff Court on Thursday charged with the murder of Vicky, who was last seen in Bathgate, West Lothian, in 1991.
The second body found in the Margate house was removed on a stretcher by undertakers on Friday afternoon.
A post-mortem examination was due to be carried out in the evening.
"The McNicol family have been informed but there is no indication at this stage of the identity of the remains," said a spokeswoman for Essex Police.
The fifth day of the search at the Irvine Drive property involved lifting the patio and excavating the ground underneath.
Buried in sandpit
Essex Police said areas of concrete floor inside the house were also being drilled and any abnormalities or other areas shown up by radar were being examined.
The spokeswoman declined to say if the body was found inside the house or in the garden, where Vicky Hamilton's remains were buried in a sandpit.
Ms McNichol's father, Ian, 68, said: "I have had a call from the police and they seem to think they might have found Dinah.
"I will be absolutely elated if they have. It will mean we will be able to grieve as a family.
"It has been long wait. I always said I wanted to know what happened to my daughter before I died and hopefully I will now."
The family who lived in the house until Monday have been receiving support from Kent Police family liaison officers.
The force's Det Supt Chris Hogben said: "We're also putting a lot of staff into the local community in terms of public reassurance, and answering any questions or concerns." 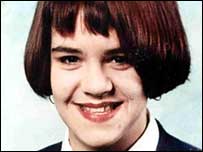 Vicky Hamilton went missing as she returned home in 1991


On Friday morning, three archaeologists were on site in Irvine Drive.
The forensics experts are from University College London, the Metropolitan Police and a Sussex-based archaeological society.
Officers carried out house-to-house inquiries in Irvine Drive on Thursday.
Police have also appealed for any residents who lived in the area at the same time as Peter Tobin to get in touch with them.
Miss McNicol was last seen in a man's car after she and a friend hitched a lift following a music festival in Liphook, Hampshire, in August 1991.
Her friend was dropped off at junction eight of the M25, near Reigate, Surrey, but Miss McNicol, the car and the driver have never been found.
(source bbc.co.uk)


This is quite shocking in my opinion. This house, where this killer lived, is within a stones throw of where i live. The news helicopters are still up in the sky now. This is breaking news on sky news. I suddenly want to move to australia even more.
I never thought anything like this would happen where i live.
You must log in or register to reply here.