A visual history of OSNN

Since 2001, the site has existed under many names and has been powered by many different content management systems. Join us for a trip down memory lane...

Some of the images in this article have been edited together from archival posts and attachments.

The very first iteration of XP-erience I am aware of, created to help those users just getting Windows XP which was a huge departure from Windows Millennium and Windows 98 and literally everyone that hadn't used Windows 2000 was utterly lost.

The site was powered by PHPnuke, the very first PHP Content Management System, which had a completely different database to that of vBulletin 2.x that used to power the forums. Integration for comments was available and possible but was not used.

Not all features were widely used here as you can see and the layout was quite bare, but it was a great introduction to PHP for me and the first real forum I joined - I actually joined to make a sarcastic comment.

The very first upgrade in early 2002 which was an attempt to reduce the amount of power the shared server needed as other hosts on the same server were complaining, this is also the first time the recent forum block was added. No expense was spared on the graphics design. 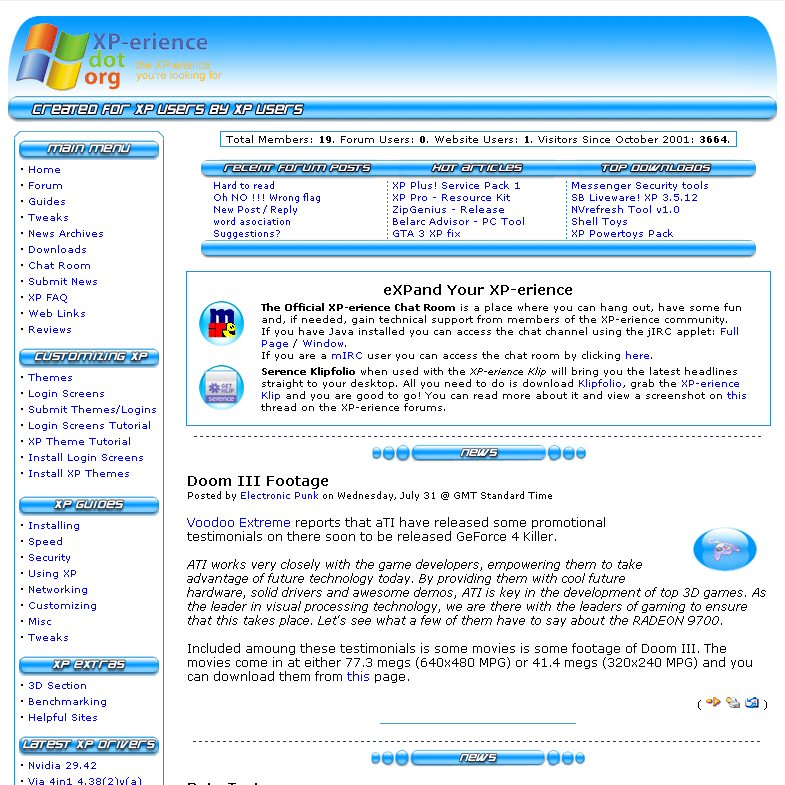 The first effort to reduce server load did not work, so I worked with a few graphic savvy users on the forums to create a prettier version of XP-erience. It was run from my local server and we put in hours of work getting everything ready, but the site owner decided to not use it and move in a different direction. In retrospect it all looked a bit bubble gummy and although the site has had many blue versions, including right now, we never went that light and bubbly!

It was also the start of a time where we wanted to increase the quality of articles, not just throwing a sentance a link in, I wanted to make sure a little information was added. This predated prevalent use of blogs so was more a mixture of personal opinion and context. 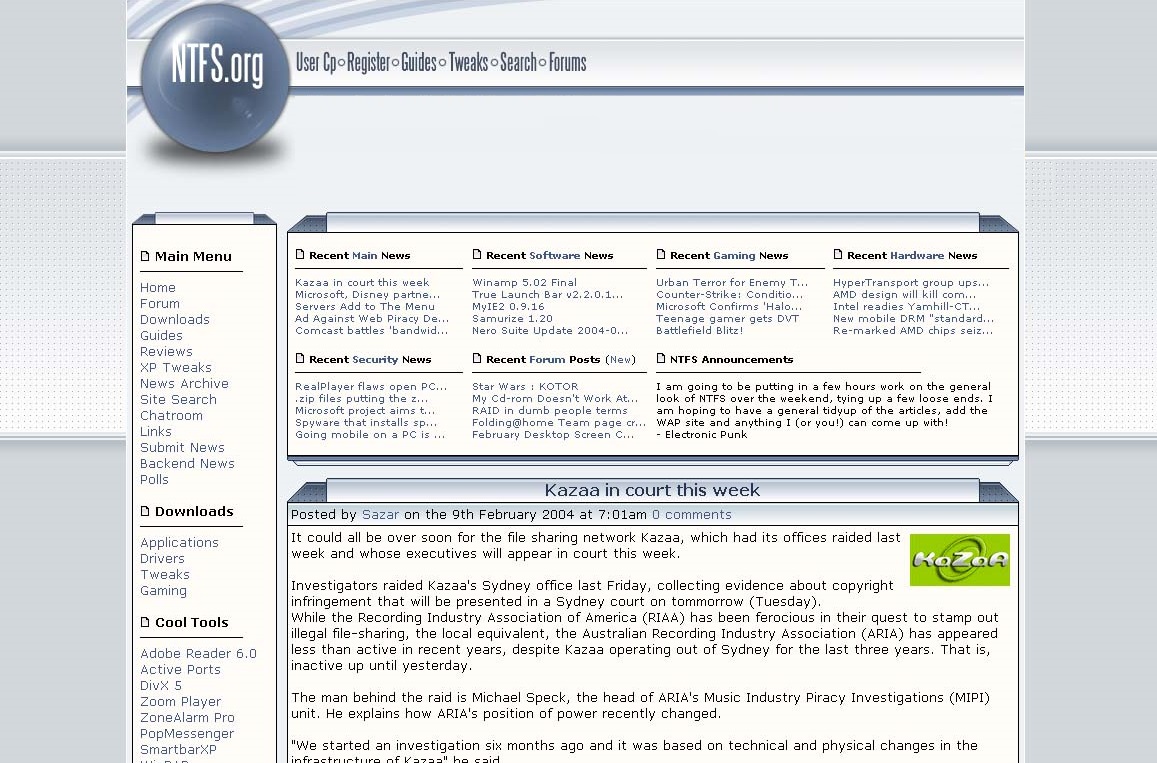 The old hosts would apparently not release the old XP-erience.org domain name and there was a very short period where it redirected to our new site NTFS.org.

The site was powered by Virtuanews which was developed by the same person that developed the CMS for Neowin at the time and finally merged the forums and site into a single user base.

We did have a little time to prepare this, so it launched with vBulletin 2.0 remaining on the forums but we were able to skin it with a theme called Orbitz which we also designed as a frontpage theme here. 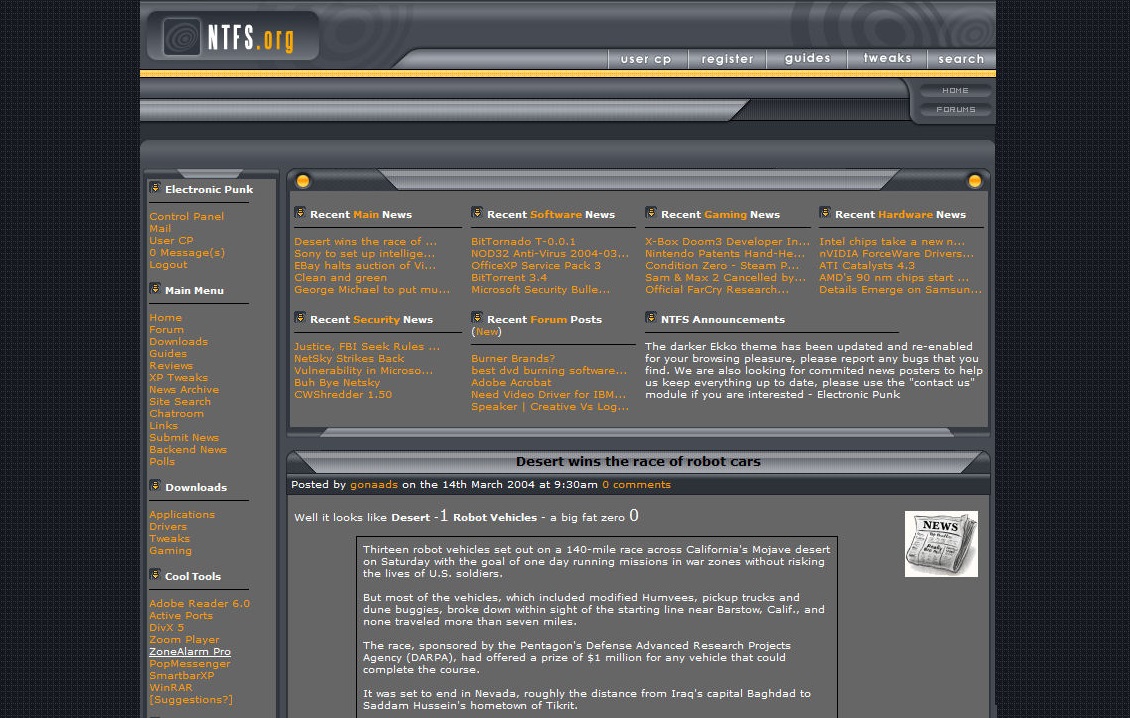 We used Virtuanews for quite some time and we added multiple themes and enhancements that users could change via a drop down, the forums had the same themes but they were independently controlled. 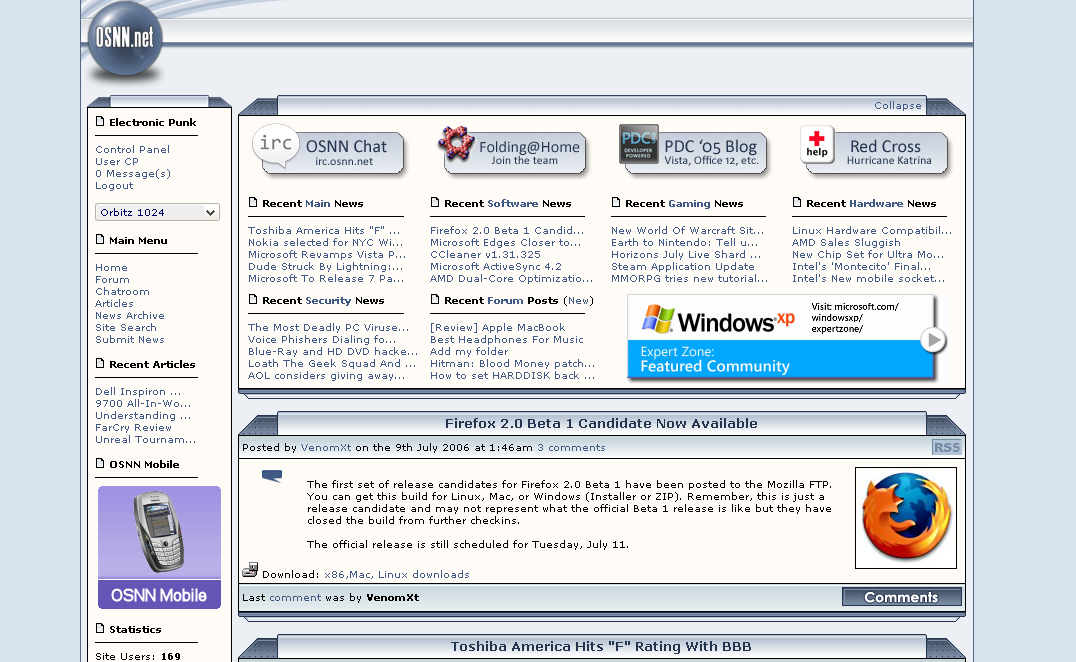 We also enhanced the existing theme many many times.

During this time, I made a cock up during the upgrade to vBulletin 3 and it turned out our database backups were not as complete as I thought. We lost quite a bit of forum and user data, some of it was able to be recovered and we mounted a huge project to rebuild threads and user accounts based on posts - amazingly this work was actually completed.

When the site owner found out about this, despite being quite a bit into the process, he effectively pulled the plug and said we could take it over and would give us a week to switch hosts and come up with a new name.

We had a new site up and running on a new host a day later and hastily among the team we came up with OSNN.net, once he saw the new site was up, he immediately pulled the plug and redirected NTFS.org to his awful company pages. He has not been heard from since.

During this time, we also proudly became members of the Windows XP Featured Community, the precursor to today's Windows Insider Program. 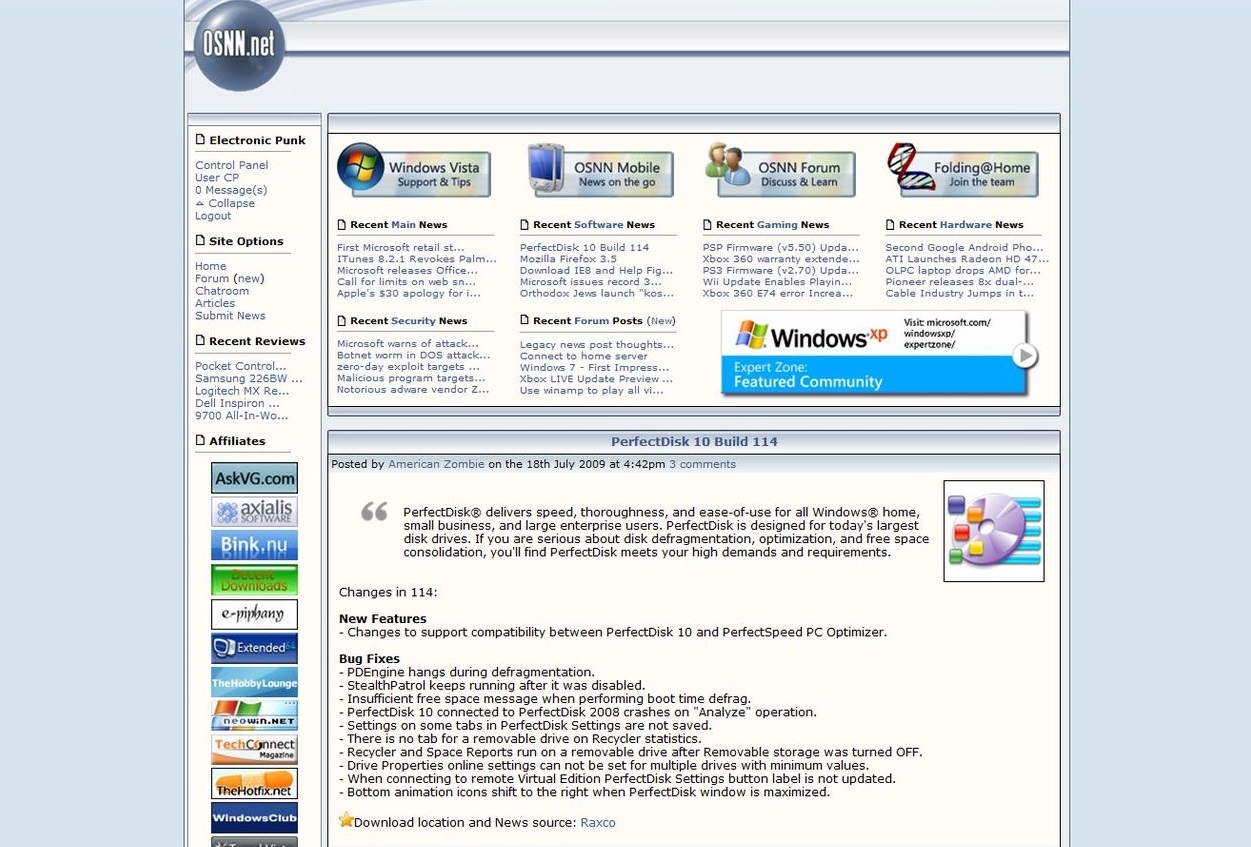 Three years later and not looking a huge deal different, but for varying reasons it was time to make our first major change for some time.

Virtuanews was insecure (with published security issues), unsupported and was sadly starting to look a little dated.

We made the move to both vBulletin 3 and vBadvanced to truly unify the platform. I was very proud of this iteration of the site and it remained on this platform for four years!

I didn't like the direction that vBulletin were taking and their software licencing was starting to get expensive, so I look into an alternative called XenForo and I mostly liked what I saw.

There was also a major security issue with VbSeo that made no action impossible so something had to be done.

My time was unfortunately limited, so I only got a bare bones design created with the logo thrown in there, I used a portal called "CTA Featured Threads & Portal" that allowed any forum thread with a certain prefix to be promoted to a post on the front page, which was a long term dream of mine which effectively would have allowed any forum member to post a news article which would both note the original author and mention the editor that had promoted and possibly edited the article.

Sadly, things were left dormant for a very long time and really the world felt it had moved on from this kind of site, to a more instant social media, disposable content type situation so it never really went anywhere but the code was solid and articles posted were fed into both Facebook and Twitter via RSS.

Things have been quiet for quite some time, but I never had any intention of shutting the site down while I also maintained the server it was running on. The membership have moved on, although I still see them on Twitter, Facebook, Steam and occasionally on the other specialised forums I visit.

I mostly use the server for hosting a few friends pages and work scripts, so do keep it up to date.
The hosting is mostly managed by Plesk Onyx and the most recent release is nice, automates and simplifies much of the work I used to rely on X-istence for.

One new feature it adds is a quick site audit, you get points for adding certain features, no real benefit other than being unable to attain the max score by paying for additional services that the author has no doubt some involvement in.

But it did make some valid suggestions, such as securing the site. Most recent versions of Google Chrome will make it very obvious if you visit a site that is not secured with SSL so I did that for all sites.

I them upgraded PHP to version 7, MySQL to 5.7 but then had to check that everything was still working across all the sites and went in and removed domain features that really weren't being used on the sites.

I have also created/used scripts to automatically back up site files and databases, because apparently sometimes things go wrong.

Then I saw that our installing of Xenforo was quite behind so figured I would get it up to date. This near enough involved removing all scripts and customisations, one of those turned out to be the portal so I had to find a new one of those as "CTA Featured Threads & Portal" was not yet upgraded.

There are many enhancements to this new version, as well as a completely different system powering just about everything, many of which I am still deep diving into, but you can now associate and sign in with Facebook, Google, Twitter and your Microsoft account - if you like that sort of thing.

Most importantly, I had fun doing it and have been re-customising and adding some of the cool features that existed on the site before the migration to Xenforo and will keep doing it in an effort to bring back on our own take on the design.

If you have any screenshots of other older incarnations of XP-erience.org, NTFS.org or OSNN.net do let me know and I will factor them in, but for the most part I think I have captured some of the many changes over the last 16 years.

Special bonus, the forums from 2004 as well although this particular copy was running on my development server (aka my desktop) 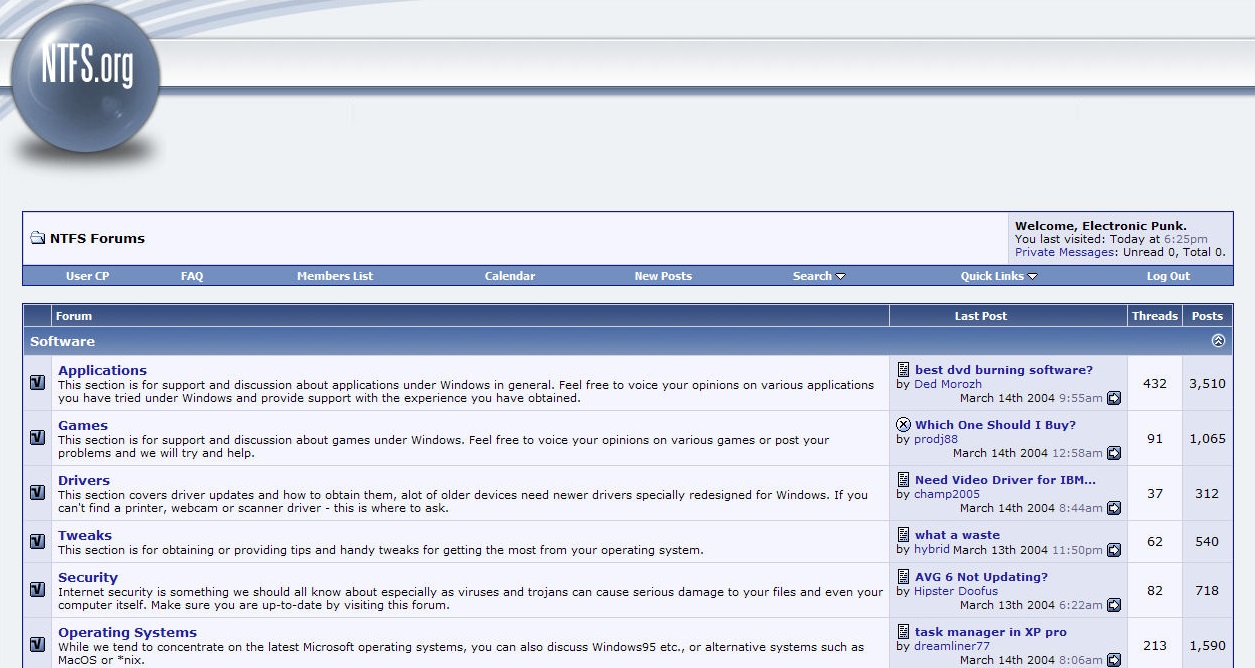 so.. what does the future hold?

Who knows, just having some fun while getting everything on the server and site updated, still need to keep things secure!

Still adding bits here and there, waiting for responses from developers, making sure sitemaps and what not still work, RSS is in a mess at the moment so I can't get the data I want out nicely.

Ah the good old days, shame we all drifted away but that's life. I'd love to see all the old faces even if they just popped in to say a quick hi and let us know how they're doing.

Will just have to see who shows up

I'm here! Randomly stopping by to see whats up.

Good to hear from you, hope all is well!

Thanks for the trip down memory lane, EP. Nice to see some of you again!

I got all nostalgic tonight for whatever reason. Suddenly I thought about spammers-paradise.com, which sadly seems to be offline for some time now. Luckily archive.org still contains some pages to ease the nostalgia-itch. Of course I had to go to the site where it originated from, osnn.net, formerly xp-erience and ntfs.org. And yes, this is exactly what I needed, I love these kind of trips down memory lane, it all started 18 years ago, maybe even longer. My first memories of this place are adults now I have no idea if anyone will ever read this, there doesn't seem to be much activity around here. If someone does and recognize me, give me a shout! I'd love to hear from you. Cheers!

This trip down memory lane has been a trip, thanks for sending out the spam EP

I stopped by just the other day but prior to that it's been years since I last visited. Nice to see some veteran XP-erience / NTFS / OSNN people are still alive and kicking ass.

Jewelzz said:
This trip down memory lane has been a trip, thanks for sending out the spam EP

I stopped by just the other day but prior to that it's been years since I last visited. Nice to see some veteran XP-erience / NTFS / OSNN people are still alive and kicking ass.
Click to expand...

The nostalgia evoked from those few screen caps is ridiculous. Good times

Been two years since I posted that and still feels the same. Error in the first image though, should say "UK Solutions - XP-erience Stealers"

I think I remember each of these changes. Crazy to think it's been almost 20 years since I started browsing for answers to my XP questions.
You must log in or register to reply here.