Microsoft will be ending support for Internet Explorer 8, 9, and 10 beginning Tuesday, January 12th.

After this date those browsers will no longer receive updates or patches.
Internet Explorer 11 will still be supported.

If you know anyone still using these browsers, or even WindowsXP be sure to question why you know them.

Windows 10 RTM: June is the target

Microsoft is moving at a very quick pace with Windows 10, from new technical previews being pushed at a semi-regular pace, to also building Windows 10 for phones at the same time. It goes without saying that all the engineers at Redmond are putting in long hours to bring you technical previews that have already been released, but there is light at the end of the tunnel for the final build.

The next logical question is when will the OS be completed? We are hearing that Microsoft is targeting the month of June at this time, but as with any timeline, this could slip.

Why is the company targeting June instead of its traditional August release? Well, the month of August did not make a lot of sense if you were trying to sell licenses and devices for the back to school market. Previously, when an OS hit RTM in August, hardware from OEMs would not be ready until October which is good for the holidays but misses the back to school shoppers.

So, Microsoft is doing the logical thing here and will push for Windows 10 to RTM in June so that it can have devices ready for the school shoppers, like the next generation Surface.

While we are still digging around for more details, Microsoft knows that it can't ride the Surface Pro 3 forever, it will need to include a Broadwell chip in the device in the near future to remain competitive. Sure, the rush is not immediate, but it needs to happen sooner rather than later, and why would Microsoft launch a new Surface with Windows 8.1?

If you look back to last year, Microsoft released the Pro 3 in June, perfect timing for the back to school market. It would make a lot of sense for the company to release the next generation Surface around the same timeline with Windows 10, and we believe that is their current intention at this time.

Look for Microsoft to talk a lot more about Windows 10 at its upcoming developer conference, BUILD, that takes place at the end of April.

[Update] For a bit more information about the timetable, if you look at the Windows 8 release schedule, that OS hit RTM August 1st, 2012 and Windows 8's consumer preview was at the end of February.

For Windows 10 the 'consumer preview' arrived in January which means for Microsoft to hit the June RTM schedule, they are on-track as they only need to shave about 30 days off of the Windows 8 release patterns which they have already done so far with Windows 10.

Skype is a freemium voice-over-IP service and instant messaging client, currently developed by the Microsoft Skype Division. The service allows users to communicate with peers by voice using a microphone, video by using a webcam, and instant messaging over the Internet. Phone calls may be placed to recipients on the traditional telephone networks. Calls to other users within the Skype service are free of charge, while calls to landline telephones and mobile phones are charged via a debit-based user account system.

The release blog announcement also suggests that Windows 8 users will also get a spellchecker, which is great as it is definitely the area where I make the most typos.

The Windows 8 classic Start Menu will arrive in August!

Looks like the folks that still hate Windows 8 will have one less reason in August, as Microsoft have announced that both a more classic start menu and the ability to run "modern" applications within a Window as shown below. 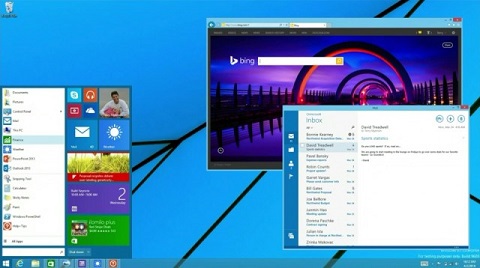 I am always pleased to see such great momentum with operating system developments, but I must admit I was starting to get used to the new full screen menu but I am sure I can adjust back just as quickly if it is done correctly.

I do find the live tiles fairly useful in some applications but must admit for services like Twitter and Facebook I continue to use the web versions just as well, although I appreciate that on Tablets the apps are always far more accessible.

Dropbox is an online storage provider and with all the options out there is still one of the best. I use this application to easily sync files between my work and home PC but as a super easy way of getting files to other people. I also find the Android application very useful to get non-Play Store applications quickly across my various devices.

Both Microsoft and Google are making a huge push to get people using their various offerings, but this one I just keep coming back to. What is new since 2.6.28? Not alot but change is good!

2.6.30
- Fix issue with linking second account for a small number of users on Windows

Perris Calderon Electronic Punk Perris Calderon wrote on Electronic Punk's profile.
EP, glad to see you come back and tidy up...did want to ask a one day favor, I want to enhance my resume , was hoping you could make me administrator for a day, if so, take me right off since I won't be here to do anything, and don't know the slightest about the board, but it would be nice putting "served administrator osnn", if can do, THANKS